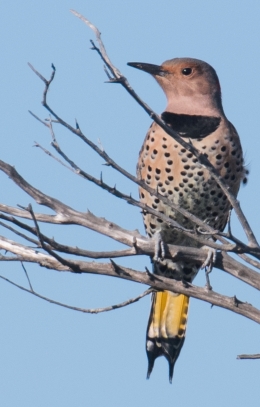 The Richard St. Barbe Baker Afforestation Area is home to woodpeckers, they can be sighted and heard pecking on the trees. Among foresters, a unique specialty taken up by Richard St. Barbe Baker is silviculturists or “tree doctor.” Joining the ranks of silviculturists, is Dr. Woodpecker, tree surgeon, extraodinaire who destroys destructive forest insects. Long ago Nature selected the woodpecker to be the chief caretaker—the physician and surgeon—of the tree world.

The study of forest insects has not progressed far enough to enable one to make more than a rough approximation of the number of the important species that attack our common trees. The birches supply food to about three hundred of these predacious bugs, while poplars feed and shelter almost as many. The pines and spruces are compelled permanently to pension or provide for about three hundred families of sucking, chewing parasites.

The recent ravages of Dutch elm disease (DED) fungi (Ophiostoma) is caused by a member of the sac fungi (Ascomycota) affecting elm trees, and is spread by the American elm bark beetle Hylurgopinus rufipes, who transmit the fungi. Together with other evils, suggest at once the bigness of these problems and the importance of their study and solution. The insect army is as innumerable as the leaves in the forest. This army occupies points of vantage in every part of the tree zone, has an insatiable appetite, is eternally vigilant for invasion, and is eager to multiply. It maintains incessant warfare against the forest, and every tree that matures must run a gauntlet of enemies in series, each species of which is armed with weapons long specialized for the tree’s destruction. Some trees escape unscarred, though countless numbers are killed and multitudes maimed, which for a time live almost useless lives, ever ready to spread insects and disease among the healthy trees.

Every part of the tree suffers; even its roots are cut to pieces and consumed. Caterpillars, grubs, and beetles specialize on defoliation and feed upon the leaves, the lungs of the trees. The partial defoliation of the tree is devitalizing, and the loss of all its leaves commonly kills it. Not only is the tree itself attacked but also its efforts toward reproduction. The dainty bloom is food for a number of insect beasts, while the seed is fed upon and made an egg-depository by other enemies. Weevils, blight, gall, ants, aphids, and lice prey upon it. The seed drops upon the earth into another army that is hungry and waiting to devour it. The moment it sprouts it is gnawed, stung, bitten, and bored by ever-active fiends.

Many forest trees are scarred in the base by ground fires. These trees are entered by insects through the scars and become sources of rot and insect infection. Although these trees may for a time live on, it is with a rotten heart or as a mere hollow shell. A forest fire that sweeps raging through the tree-tops has a very different effect: the twigs and bark are burned off and the pitches are boiled through the exterior of the trunk and the wood fortified against all sources of decay.

In forest protection and improvement the insect factor is one that will not easily down. Controlling the depredations of beetles, borers, weevils, and fungi calls for work of magnitude, but work that insures success. This work consists of the constant removal of both the infected trees and the dwarfed or injured ones that are susceptible to infection without hesitation. Most forest insects multiply with amazing rapidity; some mother bark-beetles may have half a million descendants in less than two years. Thus efforts for the control of insect outbreaks should begin at once,—in the early stages of their activity. A single infested tree may in a year or two spread destruction through thousands of acres of forest.

Most insects have enemies to bite them. Efforts to control forest-enemies will embrace the giving of aid and comfort to those insects that prey upon them. Bugs will be hunted with bugs. Already the gypsy moth in the East is being fought in this way. Many species of birds feed freely upon weevils, borers, and beetles. Of these birds, the woodpeckers are the most important. They must be protected and encouraged. Forest influences and forest scenes add much to existence and bestow blessings upon life that cannot be measured by gold.

Among foresters, a unique specialty is silviculturists or “tree doctor.” Joining the ranks of silviculturists, is Dr. Woodpecker, tree surgeon, extraodinaire who destroys destructive forest insects. Long ago Nature selected the woodpecker to be the chief caretaker—the physician and surgeon—of the tree world. This is a stupendous task. Forests are extensive and are formed of hundreds of species of trees. The woodpeckers have the supervision of uncounted acres that are forested with more than six hundred kinds of trees.

In this incessant struggle with insects the woodpecker has helpful assistance from many other bird families. Though the woodpecker gives general attention to hundreds of kinds of insects, he specializes on those which injure the tree internally,—which require a surgical operation to obtain. He is a distinguished specialist; the instruments for tree-surgery are entrusted to his keeping, and with these he each year performs innumerable successful surgical operations upon our friends the trees.

Borers, beetles, and weevils are among the worst enemies of trees. They multiply with astounding rapidity, and do not hesitate at all  annually killing millions of scattered trees. Annually, too, there are numerous outbreaks of beetles, whose depredations extend over hundreds and occasionally over thousands of acres. Caterpillars, moths, and saw-flies are exceedingly injurious tree-pests, but they damage the outer parts of the tree. Both they and their eggs are easily accessible to many kinds of birds, including the woodpeckers; but borers, beetles, and weevils live and deposit their eggs in the very vitals of the tree. In the tree’s vitals, protected by a heavy barrier of wood or bark, they are secure from the beaks and claws of all birds except Dr. Woodpecker, the chief surgeon of the forest. About the only opportunity that other birds have to feed upon borers and beetles is during the brief time they occupy in emerging from the tree that they have killed, in their flight to some live tree, and during their brief exposure while boring into it.

Left in undisturbed possession of a tree, many mother beetles may have half a million descendants in a single season. Fortunately for the forest, Dr. Woodpecker, during his ceaseless round of inspection and service, generally discovers infested trees. If one woodpecker is not equal to the situation, many are concentrated at this insect-breeding place; and here they remain until the last dweller in darkness is reached and devoured. Thus most beetle outbreaks are prevented.

Woodpecker holes commonly are shallow, except in dead trees. Most of the burrowing or boring insects which infest living trees work in the outermost sapwood, just beneath the bark, or in the inner bark. Hence the doctor does not need to cut deeply. In most cases his peckings in the wood are so shallow that no scar or record is found. Hence a tree might be operated on by him a dozen times in a season, and still not show a scar when split or sawed into pieces. Most of his peckings simply penetrate the bark, and on living trees this epidermis scales off; thus in a short time all traces of his feast-getting are obliterated.

Woodpeckers commonly nest in a dead limb or trunk, a number of feet from the ground. Here, in the heart of things, they excavate a moderately roomy nest. It is common for many woodpeckers to peck out a deep hole in a dead tree for individual shelter during the winter. Generally neither nest nor winter lodging is used longer than a season. The abandoned holes are welcomed as shelters and nesting-places by many birds that prefer wooden-walled houses but cannot themselves construct them. Chickadees and bluebirds often nest in them. Owls frequently philosophize within these retreats. On bitter cold nights these holes shelter and save birds of many species. Nuthatches as well may be seen issuing from a woodpecker’s hole in a dead limb.

Woodpeckers are as widely distributed as forests,—just how many to the square mile no one knows. Some localities are blessed with a goodly number, made up of representatives from three or four of our twenty-four woodpecker species. Forest, shade, and orchard trees receive their impartial attention. The annual saving from their service is enormous. Although this cannot be estimated, it can hardly be overstated.

On World Wildlife Day ~ March 3 stop, look and listen ~ remember these tales about the urban city’s forest friends. The animals are delightful characters to know. Avoid disturbing the roosting and nesting sites to respect the welfare of these birds. Tread lightly in the forest, and be respectful, the issues facing the woodlands and the semi-wilderness wildlife habitat are complex. Please support Nature Conservancy Saskatchewan, Partners in Flight, Saskatoon Nature Society, Wildlife Rehabilitation Society of Saskatchewan, Living Sky Wildlife Rehabilitation, National Audobon Society.

On speaking to young foresters. “‘Forest’ is an old word. It was derived from a word which meant the forest reserved for the royal games. The work of the forest department was to preserve and look after them. The context has totally changed. The importance of the forest is now for the whole society. The first product of the forest is its life-giving oxygen, followed by water and food. The fifth place is that of balancing the climates and arresting erosion. Raw material of industrial importance and wood are provided by the forest which, though they rank sixth in the list, are unfortunately being accorded the highest priority at present. Therefore the management of the forest should receive priorities according to the actual importance of the commodity. You have been given the dignified name of the Conservators of Forests. You are not timber merchants. ” ~Richard St. Barbe Baker, silviculturist

“I believe that if children fall in love with wildlife they will grow up wanting to protect it.”
― Imogen Taylor

. We have a motto in the Men of the Trees. TWAHAMWE. It is an African word meaning ‘pull together’ and I pass this on to all those concerned with conservation in this country. I would like to call you to silence for a moment with the words of Mathew Arnold:
“Calm soul of all things, make it mine,
To feel amidst the City ‘s jar
That there abides a peace of thine
Men did not make and cannot mar
~Richard St. Barbe Baker