The afforestation areas have a unique sense of place. Place and the sacredness of place is something that indigenous people feel are being lost in this day of truth and reconciliation.

Places are embodied with the aura of that which is sacred or holy and can be dedicated as sacred places as can be objects, artifacts, or organisms.

In the afforestation areas is a species at risk, an endangered species which means that it is of minute and scarce quantity in danger of disappearing entirely. This species at risk is sacred to indigenous people and to other cultures as its very name bears homage to that which is holy.

There is much loss and anguish for the extirpation of the bison from the plains historically. In this day of age with Traditional Ecological Ways of Knowing, and western scientific knowledge shared through Species at Risk Act SARA, The Committee on the Status of Endangered Wildlife in Canada (COSEWIC) and the Saskatchewan Conservation Data Centre that extirpation of species is seeing history repeating itself. Why would anyone wish to wilfully and maliciously extirpate a species at risk? Why would anyone wish to despoil, wreck, raze, devastate a species at risk which is accorded a high honour within our indigenous community, as well as in other cultures globally? Why would anyone wish the bison to disappear from the plains?

If anyone has any clues or reports to be made in protection of the afforestation areas, please call the Provincial Government TIPP hotline for illegal forest harvesting. or call the City of Saskatoon Parks department 306-975-2476 or the Meewasin Valley Authority 306-665-6887 Please help protect these places which so many have come to honour and appreciate for a variety of reasons. What is the difference between walking, cycling and skiing in a parking lot and in a forest? 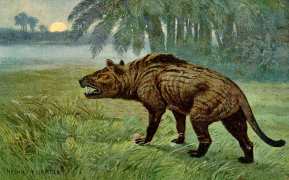 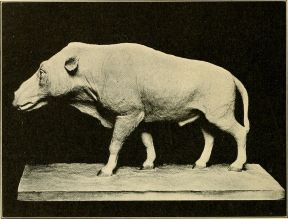 Treatment of Climate Change is much expanded as a result of recent research at the local university and we learn fascinating details of the many fluctuations from Pleistocene times to the present day warming trend.E.R. Ward Neale

Much debate has surrounded the late Pleistocene extinction of large animals. In North America, most extinctions took place within a narrow time interval, between 10,000 and 12,000 years ago…. The wave of extinctions coincided with rapid climatic changes at the end of the last glaciation. Climatic changes led to major alterations in vegetation cover on which herbivores depended, which precipitated an ecological crisis for large land animals.James S. Aber

Can you imagine walking in the footsteps of the great Giant Beaver, the Mastodon, or the American Cheetah?  12,700 years ago, 90 genera of mammals weighing over 44 kilograms 100 pounds) became extinct.

Was glacial Lake Agassiz home to the nine foot long sabertooth salmon? Would giant tortoises be walking the beaches of Glacial Lake Saskatoon I alongside the spectacular armadillo and the giant armadillo-like Glyptotherium?

When you are out in the Richard St. Barbe Baker Afforestation Area, are you walking in the footsteps of the giant sloths and short-faced bears weighing 900 kg (1 short ton). Would you meet up with the American lions (1.6–2.5 m long (5 ft 3 in–8 ft 2 in)), dire wolves, “American cheetahs” (Miracinonyx -weighing 70 kg (150 lb)) or with saber-toothed cats like Smilodon and the scimitar cat, Homotherium? The saber toothed cat, Smilodon populator, is thought to weigh up to 400 kg (880 lb).

Can you just see the camelid animals such as two species of now extinct llamas and Camelops. And what of the other mammals, two species of bison; stag-moose; the shrub-ox and Harlan’s muskox; the 14 species of pronghorn (of which 13 are now extinct); horses; mammoths and mastodons.

When you look up during your time travel excursion to the Pleistocene era, there would be birds such as giant condors and other teratorns soaring in the air overhead. One of these birds, Aiolornis incredibilis (formerly Teratornis incredibilis), of the teratorn family, was the largest known North American capable of flying possessing a wingspan of up to about 5 m (16 ft) and weighing in at 23 kg (51 lb).

Before the Quaternary extinction event there were tapirs; peccaries (Including the long nosed and flat-headed peccaries) and saiga added to the mix.

Walking in the footsteps of the Pleistocene megafauna is quite an adventure! When you are out at the Richard St. Barbe Baker Afforestation Area, or when you are around and about the afforestation area formerly known as George Genereux Urban Regional Park, both created by the Pleistocene spillway flooding, consider also the Pleistocene mammals that wandered North America, the mastodons, giant condors and sabre toothed cats.

Ongoing analysis will no doubt have a focus on elucidating the successive train of events to better understand the geological conditions of the West Swale.  Philosophers and geologists are tantalized seeking their PhD theses uncovering and hypothesizing upon the wealth of information archived in the West Swale and South Saskatchewan River valley.

The West Swale  reconstruction of the most recent glacial retreat zipped through the Pleistocene geology, leaving us to wonder at the spectacular megafauna of the Pleistocene.  Why are there no longer any Giant Condors, or Mastodons roaming the prairies?  Why did the native North American horses and camels disappear?

Peace cannot be kept by force;
it can only be achieved by understanding.
– Albert Einstein

Most of the important things in the world
have been accomplished by people
who have kept on trying
when there seemed to be no hope at all.
– Dale Carnegie