Common Characteristics of the genus Rosa

How can we determine which of the roses are which in the Richard St. Barbe Baker Afforestation Area and George Genereux Urban Regional Park forest communities?

Binomial nomenclature is a two-naming system featuring the first part of the name – the generic name– identifies the genus to which the plant or organism belongs, while the second part – the specific name or specific epithet – identifies the species.

The plants belonging to the genus Rosa can be characteristically described by flowers, leaves, fruit, and thorns.

The flowers of most species of native roses have five petals. Each petal is divided into two distinct lobes and is usually white or pink. Beneath the petals are five sepals. These sepals may be long enough to be visible when viewed from above and appear as green points alternating with the rounded petals. There are multiple superior ovaries that develop into rose hips bearing achenes.  Roses are insect-pollinated in nature. 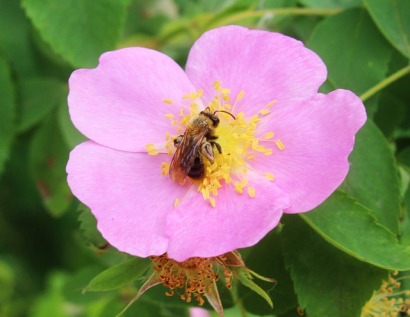 The leaves are borne alternately on the stem. In most species they are 5 to 15 centimetres (2.0 to 5.9 in) long, pinnate, with (3–) 5–9 (–13) leaflets and basal stipules; the leaflets usually have a serrated margin, and often a few small prickles on the underside of the stem. Most roses are deciduous.

The leaves of the wild roses of the region are alternate, and oddly pinnated.  Pinnation is the arrangement of the leaflets arise on both sides of a common axis.  This common axis is referred to as a rachis which is the backbone or spine of the leaf.   Each petiole or the stalk attaches the leaf to the stem or peduncle of the plant.  The small leaflets, themselves have little stems called petiolules.  The root pinna is from the Latin meaning “feather”, and these plants can be referred to as “feather-leaved” in everyday or informal usage.  Oddly pinnated leaves are also called imparipinnate, both terms meaning that the leaf bears one lone leaflet at the terminal or top of the leaf, rather than a pair of leaflets.

The aggregate fruit of the rose is a berry-like structure called a rose hip.  The hips of most species are red. Each hip comprises an outer fleshy layer, the hypanthium, which contains 5–160 “seeds” (technically dry single-seeded fruits called achenes) embedded in a matrix of fine, but stiff, hairs. Rose hips of some species are very rich in vitamin C, among the richest sources of any plant. The hips are eaten by fruit-eating birds such as thrushes and waxwings, which then disperse the seeds in their droppings. Some birds, particularly finches, also eat the seeds.

The sharp growths along a rose stem, though commonly called “thorns”, are technically prickles, outgrowths of the epidermis (the outer layer of tissue of the stem), unlike true thorns, which are modified stems. Rose prickles are typically sickle-shaped hooks, which aid the rose in hanging onto other vegetation when growing over it. Some species such as Rosa Acicularlis have densely packed straight prickles, probably an adaptation to reduce browsing by animals. Despite the presence of prickles, roses are frequently browsed by deer.

The amazing thing about the rose bush, is that it will do the best on alluvium soils which are seasonally flooded, which works out well at the afforestation areas located as they are in the West Swale (a low-lying area caused the Pleistocene Yorath Island glacial spillway.)  However, that being said, the roses have a very high drought tolerance. 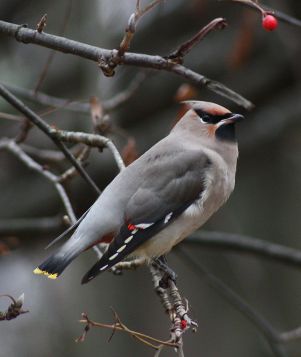 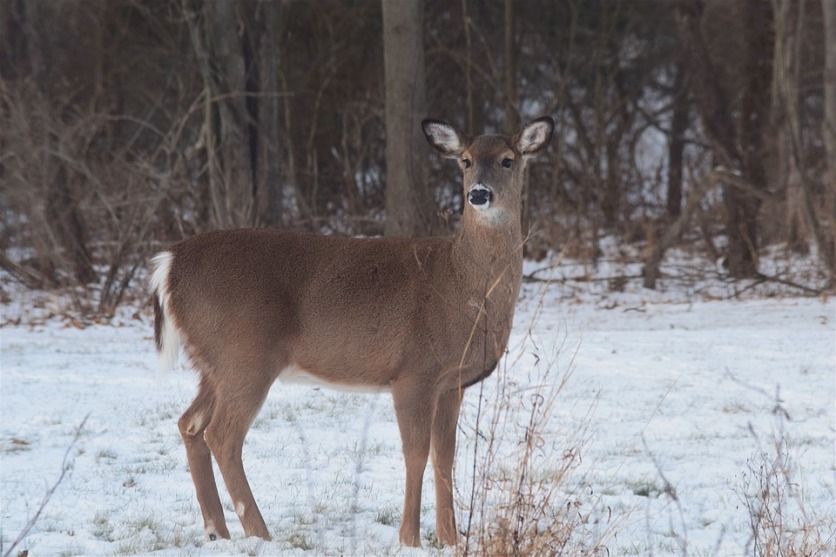 Mule deer, snoeshow hare, coyotes, squirrels, white-tailed deer and birds such as waxwings, pine grosbeaks, and grouse will nibble on the rose hip fare provided by the rose bush.  Wild rose hips are high in both Vitamin A and Vitamin C.  These animals, and birds will carry the seeds (achenes) away after nibbling on the rose hips, and through the digestive process disperse the seed in new areas.  The achenes do not sprout immediately, in fact, the majority will sprout on the second spring after snow melt.  The seeds require this period of dormancy and require the seasonal changes of warm and cold in order to sprout.  In regards to the health of the animals, the crude protein is higher in the wild rose hip while the leaves remain on the trees.  The rose hips remain on the shrubbery into the winter months, providing a much-needed snack during the cold days of the year for winter foragers when snow covers the ground.  The pollen during the month of June is beneficial for many pollinators.

When trying to distinguish various species of wild roses, bear in mind, that species may hybridize with one another.  The next chapter will delve into the taxonomic classification for species of roses at the Richard St. Barbe Baker Afforestation Area and George Genereux Urban Regional Park forest communities.

“Man has lost his way in the jungle of chemistry and engineering and will have to retrace his steps, however painful this may be. He will have to discover where he went wrong and make his peace with nature. In so doing, perhaps he may be able to recapture the rhythm of life and the love of the simple things of life, which will be an ever-unfolding joy to him.” ~ Richard St. Barbe Baker