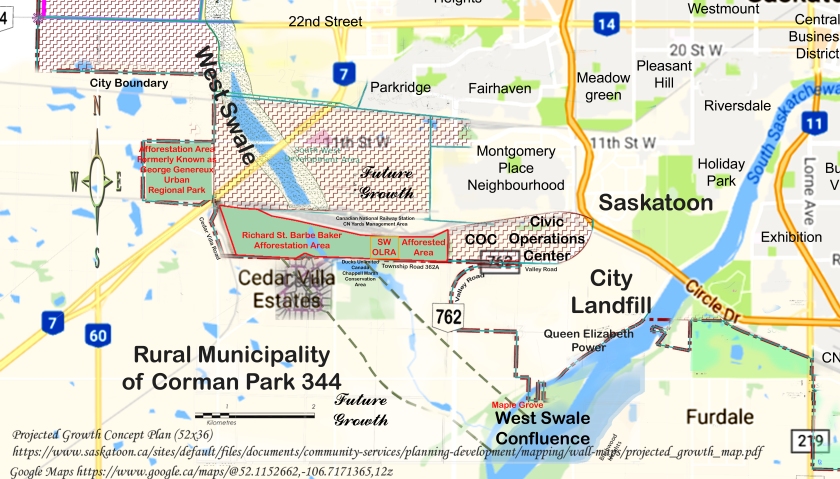 On any maps showing the city and RM of Corman Park 344, the small square extending west from SK Highway 7 is “George Genereux” Urban Regional Park

Both Richard St. Barbe Baker Afforestation Area and  “George Genereux” Urban Regional Park  received their respective names  October 19 1978 (proposal to City Council) – October 30, 1978 (vote by city to approve and finalize). The name “George Genereux” was taken for a pocket park in another area of Saskatoon, leaving this urban regional park without a name.

What land development and growth is proposed for the land around George Genereux Urban Regional Park?

“The clearest way into the universe is through a forest wilderness.”  John Muir

Who was George Genereux?

Genereux was born to Dr. Arthur Genereux (b1901 Lethbridge AB – March 12, 1975) and Catherine (d 1964).(Source)  At the age of 16, Genereux was diagnosed with Rheumatoid Arthritis, which ended his sporting career in trap shooting when he was 20.(Source and Source)

Genereux started training with his father, Dr. A.F. Genereux, and Jimmy Girgulis when he was 12 years old. James “Jim” Girgulis, himself won the Canadian Team Trap Shooting Campionship in 1939 and 1941.  Further, Girgulis, won every trap shooting event held across Western Canada.   Genereux went on to trap shooting events across  Canada and the United States.  At the age of 13 Genereux won the Midwestern International Handicap Honours, then he acquired 3 successive Manitoba – Saskatchewan junior titles. (source) Genereux won the Junior Championship of North America at the Grand American Handicap, held in Vandalia, Ohio in 1951.  During this event, Genereux broke 199 clay pigeons out of 200.  Genereux also placed second in the Oslo, Norway World Championships, 1952.  (Source, Source,  Source and City of Saskatoon archives)

Genereux, attended the University of Saskatchewan to earn his Arts and Sciences degree, then he went on the McGill University to study Medicine graduated 1960.  Dr. George Genereux was for years a Professor of Radiology at the Royal University Hospital, Saskatoon.

The biography submitted to City Council stated that “It is considered appropriate to select in his honour this particular tract of semi-wilderness with its favorable habitat for wildlife of many kinds.”

Genereux is buried at Woodlawn Cemetery along with his mother and father.  Genereux died April 10, 1989.

“At the time of his death he was working with three other internationally known  specialists on the third and fourth volumes of a study of chest diseases. ..Despite his own bad health, Genereux worked to advance the cause of medical knowledge.   If you can’t help yourself, you should use your God-given talents to help others,’ he said in one interview.” Saskatoon Star Phoenix April 11, 1989

What land development and growth is proposed for the land around George Genereux Urban Regional Park?

“Trees exhale for us so that we can inhale them to stay alive. Can we ever forget that? Let us love trees with every breath we take until we perish.”
― Munia Khan

When walking in either “George Genereux” Urban Regional Park or the Richard St. Barbe Baker Afforestation Area they can be seen one from the other by peering under the CNR overpass.

With spirit we are all children of the cosmos; Without it we are orphaned and adrift.
Deepak Chopra

“Healing the broken bond between children and nature may seem to be an overwhelming, even impossible task. But we must hold the conviction that the direction of this trend can be changed, or at least slowed. The alternative to holding and acting on that belief is unthinkable for human health and for the natural environment. The environmental attachment theory is a good guiding principle: attachment to land is good for child and land.”  Richard Louv

“The future of the planet concerns all of us, and all of us should do what we can to protect it. ” Wangari Maathai.