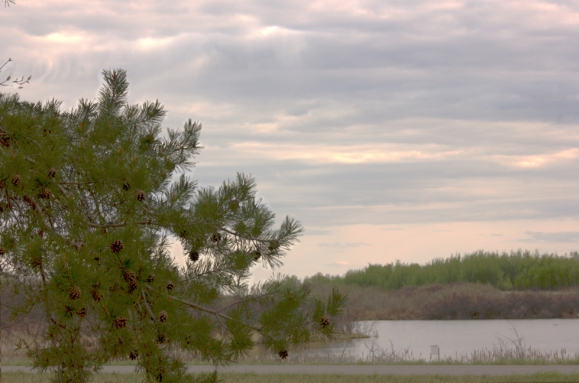 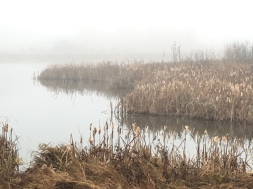 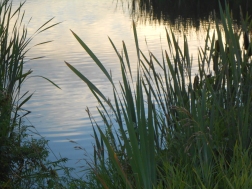 An old writer once said “the various productions of nature were not made for us to trod upon, not only to feed our eyes with their grateful variety, or to bring a sweet odour to us; but there is a more internal beauty in them for our minds to prey upon, did we but penetrate beyond the surface of those things into their hidden properties.”

Turn now to the interesting facts which the science of entomology reveals to us as to the egg-cradles, so to speak, of insects, by which is meant the various localities selected by them for the deposition of their eggs, some of them, as we have mentioned, in the water, some in the earth, some upon plants and trees, and some in mansions made by the insects themselves for the purpose of hatching their eggs.

Let us come, then, and watch the great water-beetle, at the time when the mother-insect is about to commit her future offspring to the care of the waters. She is to be found on fine days, when the sun is going down into a bed of gold, enjoying herself and delighting in the pleasant air of the evening, as she sits upon a plant close by the water’s edge; or she may even have taken up her position on a floating leaf of the plant, the clear waters flowing gently beneath her. She has been in the water all day long, and is now just emerged.  On other evenings she will take wing, and speed her way whither no eye can follow; but now, she has another and the most important duty of her existence to perform, and her customary evening ramble is not permitted to interfere with its fulfilment. On watching her closely we find her busy at some self-imposed occupation; what is its nature? To discover that, she must be closely and patiently watched. At her tail are a couple of spinning organs, which move from right to left and up and down with great swiftness, all the while a glutinous fluid, which hardens into a thread, being discharged from each of them. With this apparatus the industrious insect is spinning a pouch not unlike the purses which were in fashion before the long ones that ladies knit came to be adopted. This purse is three quarters of an inch long; it consists outside of a tissue, like parchment, which is quite impervious to water, but is lined inside with the most beautiful, light, downy material possible, which is as white as snow. There is a sort of little horn to this pouch, which admits the air, but the opening to which is protected by a layer of cross threads, which excludes the wet. In three hours of patient toil this beautiful cradle is completed. The water-beetle then safely secures it from being carried away by the waters on which it floats so buoyantly, by fastening it by cables to the neighbouring plants. Here safely moored it rests until the eggs are hatched, soon after which the little creatures within escape into the waters out of the ark, which has, during the period of their infancy, safely preserved them from every danger, both of water and wind.

Thus wraps up the look of entymology and the eggs and egg-cradles of Water Beetles.

“Where the pool
Stands mantled o’er with green, invisible
Amid the floating verdure, millions stray;
With various forms abounds, Nor is the stream
Of purest crystal, nor the lucid air,
(Though one transparent vacancy it seems,)
Void of its unseen people,
Let no presuming impious railer tax
Creative wisdom, as if aught was formed
In vain, or not for admirable ends.
Shall little haughty ignorance pronounce
His works unwise, of which the smallest part
Exceeds the narrow vision of her mind?”~James Thomson

“We cannot remove tree cover without running the risk of losing the blessing of the water cycle. We cannot denude the earth’s surface without creating the desiccation of sand the dust dunes. We cannot permit animals to devour whatever little is left of green growth. Excessive grazing of cattle, sheep and goats is as damaging to the land as a wholesale felling of trees…” Richard St. Barbe Baker

See how nature – trees, flowers, grass – grows in silence; see the stars, the moon and the sun, how they move in silence . . . We need silence to be able to touch souls. ~Mother Teresa

“Besides water, trees provide pure air. They are the great filtering machines for the human organism. They improve and transform the air in a way which is most favorable and most acceptable to the lungs of man.” Richard St. Barbe Baker